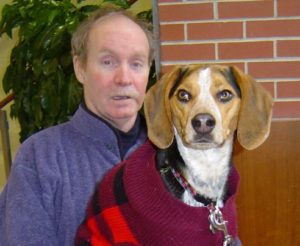 GHS is grateful to receive estate gifts by being named in Wills. One such donor was the late Richard Earl Goy (Rick). Rick was a lifelong resident of Guelph, and his love for animals began early with a childhood beagle named Skippy.

Rick was tragically injured in a car accident that left him a quadriplegic as a young man. After many years of recovery, Rick returned to school and graduated from the University of Guelph with Bachelor and Masters Degrees in Economics. He had a successful career at the University of Guelph. Rick’s caring spirit and resilience led to his involvement in a number of initiatives advocating for the people with disabilities.

Rick’s beloved hound, Dori, brought joy to his life. They would go for daily walks in the park system and along the Speed
River pathways near his home – Rick in his electric wheelchair and Dori by his side. Dori loved to jump up and sit on Rick’s lap. She was an irreplaceable member of the family who helped Rick deal with the frustrations of his quadriplegic life. Her mischievous and intuitive nature was a perfect addition to Rick’s life.

Barbara, Rick’s personal attendant for 14 years, describes their relationship: “Dori was the love of his life. His face
would light up when she jumped up on his lap. She would grab his hand and move it for hug because he couldn’t
move his hands on his own. Dori helped Rick love life even considering the pain and discomfort associated with his disabilities.” Dori died three years ago at age 12 of liver cancer – in the comfort of Rick’s lap, where she was happiest.

The bond Rick and Dori shared is a perfect example of how much pets offer to people’s lives. GHS was very honoured
that Rick chose to pay tribute to his special relationship with Dori by including an estate gift of $25,000 to GHS. We are so thankful for this generous gift.

Back to Legacy Giving