We love hearing from our adopters and how each animal is doing in their new home! Here are some Happy Tails that have been shared with us from previous adopters of the Guelph Humane Society. 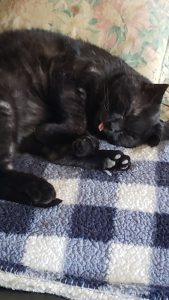 Onyx (formerly Tullio) has a few issues but is the sweetest guy. He loves to snuggle in my lap - or anyone else's for that matter. He hasn't quite found his purr yet (he's been with me since December 8, 2020) but I am sure he will. He adores having his head rubbed and almost goes into a trance. He i...Read Mores never far from me and constantly jumps into my chair when I get out of it. He's been almost sat on more than once but it doesn't seem to stop him. He has been an amazing addition to my home and wonderful company. He sure knows when it's time to eat and makes sure I never leave his tummy empty. Thank you for taking him in and allowing me to become his new Mum. 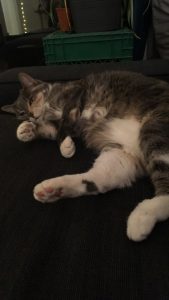 My partner and I adopted Kelly in late October 2020. When we picked her up she had gone through at least two houses, had severe anxiety that had caused her to lick the back of her leg clear of fur, a bloated abdomen and urinary problems. Within the first week, she stopped licking her leg. The next w...Read Moreeek we learned she was incredibly scared of blankets. A month after adopting her we brought her to her vet for a nail trim (we're first-time nail trimmers and wanted to make sure we would do it properly), they gave her a quick check-up and let us know that Kelly was no longer bloated, was extremely hydrated, and had a healthy urinary tract. Several months after her adoption, just last week, she slept with her stomach out for the first time. She lays on and around the blankets in the house, communicates with her mummy and daddy when she wants more water and spends every day cuddling in her favourite couch corner. She's started letting her mummy pick her up and bring her to bed for cuddles and to hold her when the rain gets too loud. Kelly loves meeting new people and loves her grandmas, who she rubs up against every time they come to see her. Her new best friends are a catnip-stuffed turtle and every string she lays her eyes on. Kelly has also become a HUGE fan of belly rubs and loves to keep watch over her catio garden. Overall, Kelly has made a complete 180. She is silky and shiny and always happy. She's the best addition to our family and so much more than we ever thought. We love her so wholeheartedly and by the number of slow blinks she returns and the times she shows us her tummy, I can see that she loves us too. Kelly has found her forever home where she will never encounter stressors again. She is our one and only princess who makes amazing leaps and bounds every day. Just last night she slept beside her mummy's head, half-on-half-off a blanket that she would have avoided in October. 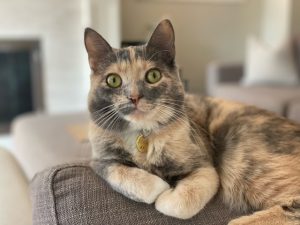 One year after her accident, June has blossomed into a confident, sweet, curious, happy, loving, hilarious little cat! She brings us all so much joy with her snuggles, purrs, and hilarious antics. She’s even softened the heart of our family’s grumpy 16 year old cat, Playdoh and brought out his p...Read Morelayful side again. She has come a long way from from the skittish kitten she once was and now enjoys meeting new people and receiving tummy rubs from them. Not even the vacuum phases her anymore. Her favourite activities include hunting bugs, playing with bubbles, and “helping” me with whatever I’m doing. Her health, weight, and mobility couldn’t be better. We are so grateful to GHS for giving her a second chance. Thanks again! -Elyse. 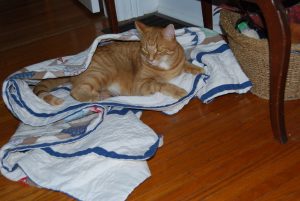 We adopted Apollo (shelter name) as a kitten in November 2018. We changed his name to Calvin because we already had a Hobbes who would be his older brother. The two hit it off and get along really well. We love him and thank you for giving us the chance to have him in our family. 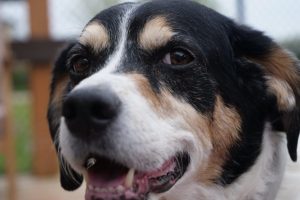 Pepper came to us three years ago this July. She has truly brought more love and happiness into our homes. Pepper is her mama’s shadow, going everywhere mom goes. She has seen some loss and some joy while being with us. Losing her schnoodle sister was very difficult but her family welcomed another...Read More baby when they had a baby girl! Pepper feels very protective of baby Emma and likes to lay beside her crib when she’s sleeping. We are so thankful every day for Pepper and for the GHS for the wonderful work they do. Thank you for Pepper. 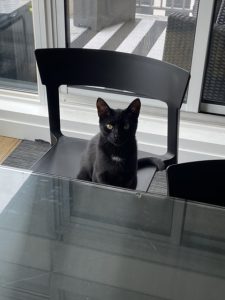 Adopted December 24, 2020! Best thing that happened at the end of a long year. Can’t even imagine life without her. She is funny, clumsy, lovable and curious. She is named after a boat motor company - can you guess that it means she purrs non stop? Thank you GHS! 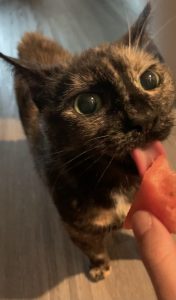 From the day we brought her home, Nova showed us her inner adventurer, immediately wanting to explore every room in our apartment, finding the coziest spots to claim along the way. While her favourite spot remains under the bed with a fuzzy blanket and her toys, every night she joins us for cuddles ...Read Moreat our feet (unless she has the zoomies, of course). She has quickly learned that the sound of our alarms in the morning mean her favourite wet food — we are truly at her beck and call — and excitedly jumps back on her hind legs when she hears the sound of her treat bag opening. Her favourite treats are chicken and tuna, but we discovered the best of all is a small piece of watermelon as evidenced by the photo. Needless to say this little bean has brought us so much love and many laughs with all her silly antics, so while her tail may be short, her happy tail with us will surely be long. 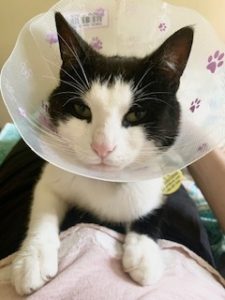 Pierre (now called Tito) came home with me on Saturday, and he fit in at his new home the second he walked out of his carrier. He wasn’t shy at all, and made himself comfortable on my bed where he cuddles with me all night, and his windowsill bed where he loves to watch the birds. I’ve never met...Read More a cat that loves to be picked up and carried around so much! There’s nothing he enjoys more than cuddles with my roommates and I, and his treats. He’s so social, and always wants to be with people. As soon as he hears one of my roommates open their door, he meows to be let out so he can go say hi. I’m so happy that he transitioned so well, using his litter box, drinking, eating, playing, and using his scratch board. He’s such a wonderful addition to our home, and I love having such a sweet companion. 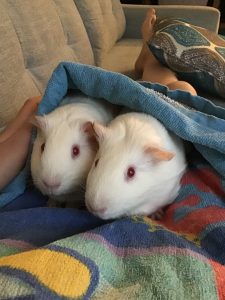 Tofu and Bubbles were adopted from the Guelph Humane Society in March 2021. They are two sassy sisters with their own unique personalities. Tofu is chatty and the leader, where as Bubbles is more quiet but loves to follow her sister around. They enjoy their time outdoors, nibbling on yummy grasses a...Read Morend clover and get very vocal at meal times. They have been a lovely addition to the family and often join the kids on their laps while they are attending online classes for some snuggles. 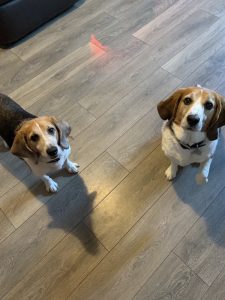 We adopted Dustin from GHS at the end of May 2021. We had just started to look for a companion for our first dog Rolly (pictured on the right) who we adopted from a lab setting a couple years ago. When I found out that Dustin was also a retired lab dog I knew just how to get him comfortable with hom...Read Moree life and that Rolly would be his support buddy in the transition. Once we brought him home he was Rolly's little shadow and was fully learning how to be a dog. In just a week he was using the doggy door like a pro and completely unleashed his goofy personality. Rolly and Dustin bonded over the love of sun bathing and playing with the mountain of toys we have for them. Dustin loves to howl at us when its time to eat and loves to cuddle, he is just a huge lovebug! We want to thank GHS and his foster for providing the best care for our boy before he came to live with us. Dustin is the perfect addition to our family and we can not imagine life without him! 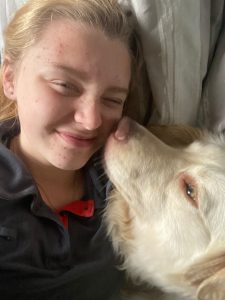 From the mighty words of Leo: Hey everyone! My names Leo, it used to be Amir. I have spent a week here with my new hoomans and loving every minute! I love taking long naps with my hoomans, getting endless belly rubs and playtime! Oh, and the walks with my hoomans are great too. They sure do tire ...Read Moreme out though! My big brother Flash has taught me so many new things! He has taught me how to pack walk, and how to lick my hoomans legs;) I’m super happy here and I’m already weening off my anxiety medication!! 1 pill a day now!! I’m super excited to be living in my new forever home with my new hoomans. I finally found my people, thank you so much to GHS for helping me find my best friends! Alright, that’s all from me. I have to go back to my very important afternoon nap with my big brother Flash. Love, Leo (P.S thanks to my favourite hooman for writing this up for me since my paws don’t work like that) 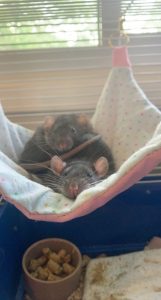 Coffee Bean (formerly Onyx) and Burnt Toast (formerly Sprinkles) were born and raised at GHS. I adopted them on the 30th of May 2021 and I'm so proud of how far they've come already. Since they're still very young, they're quite skittish and easily spooked but with a lot of love (and even more brocc...Read Moreoli bribing), they've started to come around. Toast is a little more adventurous than her sister and takes the lead when exploring new things. Bean prefers to sit in her hammock and watch Toast do all the wandering. That being said, they're equally as affectionate. Bean loves being pet while she naps in her aforementioned hammock while Toast loves holding and licking your fingers even if you're not presenting her with any food. Additionally, they are very intelligent girls. I put a litter box in their cage two days ago, in the hopes of teaching them to use it but no teaching was required. They figured it out all on their own! I'm so grateful to have adopted these little ladies and I can't thank GHS enough !!